Make a list and check it twice, the Holiday Treasure Trove arriving on December 5.

The Holiday Treasure Trove is here until December 26! Find out all about the Trove, new rewards, and special cosmetics below.

Each character level 36 and above can open the Treasure Trove once per day for FREE during the event period. Opening the Trove will give you the opportunity to purchase any of the items you see with gold, but you can only purchase one item per Treasure Trove Key used! 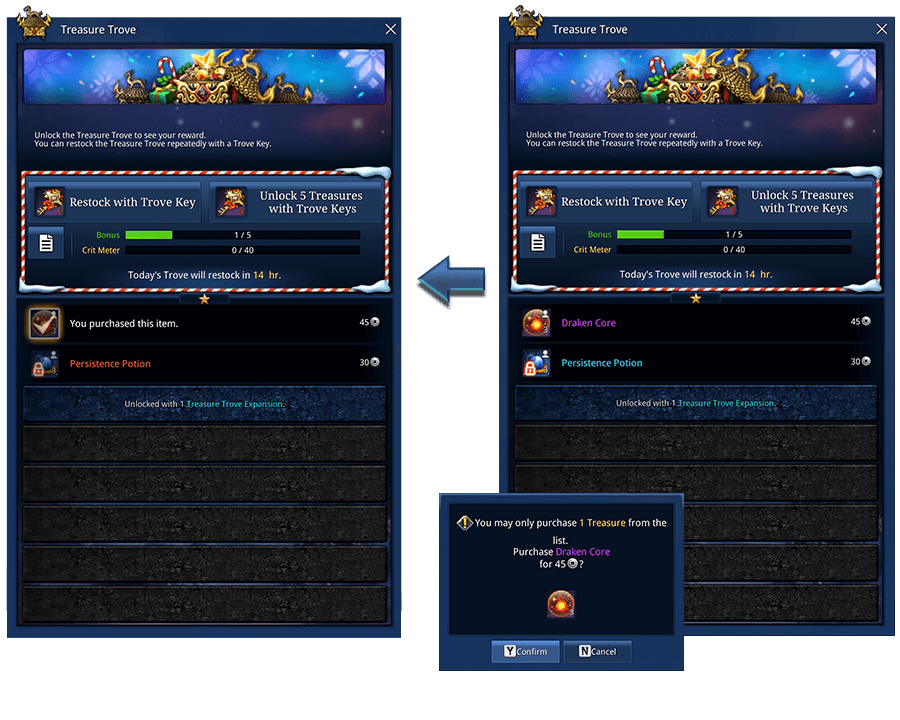 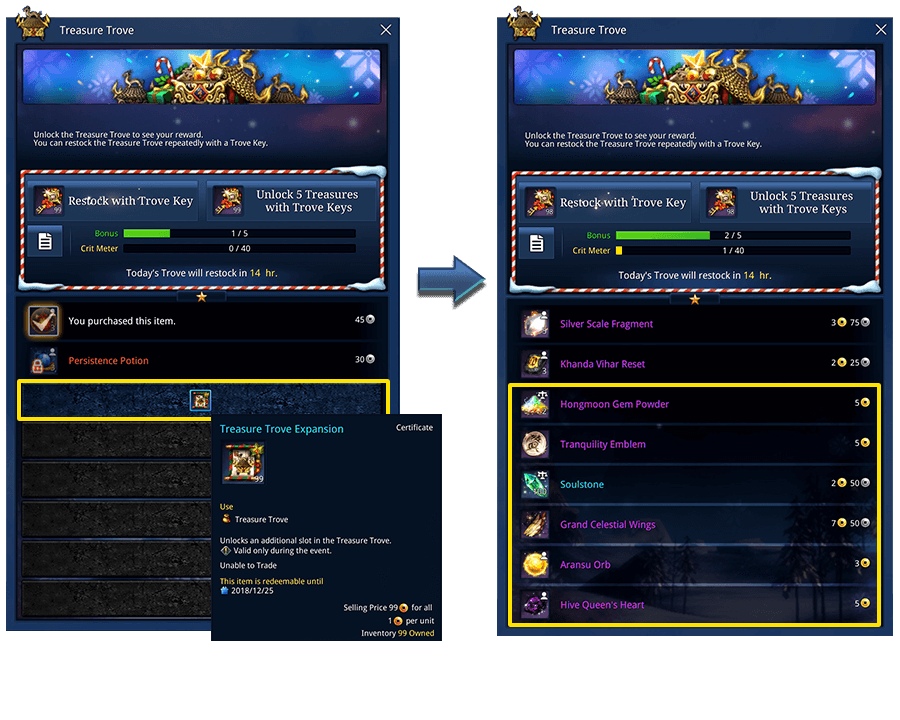 If opening each Trove one at a time is too slow for you, you can speed up the process by opening five at once! It works exactly like opening one Trove, just five times as fast. You’ll use five keys, and gain the respective amount of progress toward the Guaranteed Rewards. 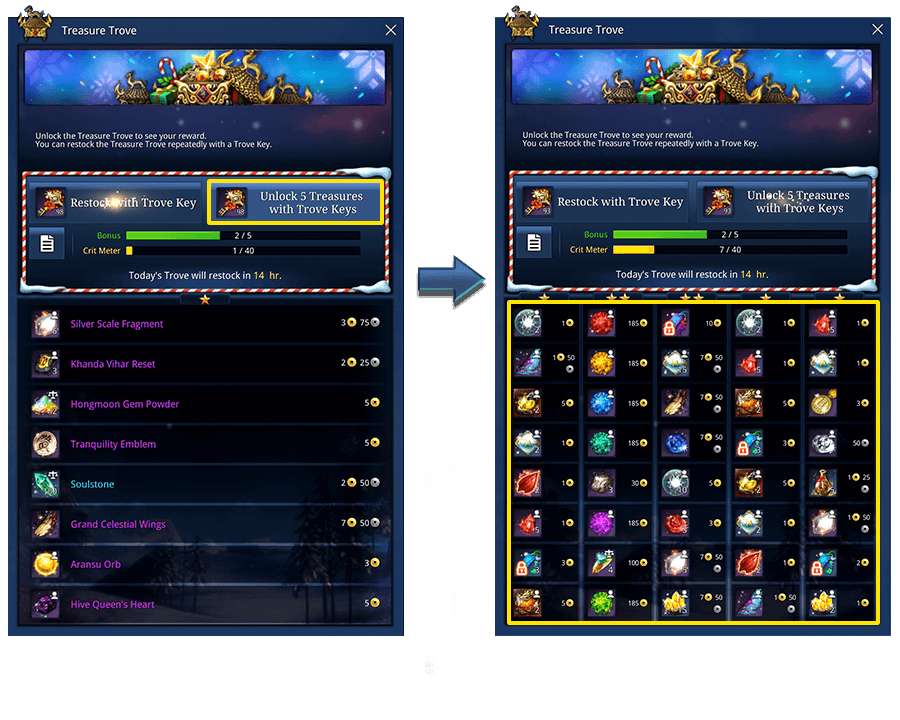 You will also find a rating for each Trove you unlock by looking at the stars at the top of the window. Most of the Troves you unlock will be one star, but it’s possible to receive two or three stars. The more stars, the more desirable the rewards!

The Crit Meter is a way to guarantee you’ll receive at least a 2-star Trove. For each purchased Treasure Trove Key you use (free daily keys don’t count), you’ll increase the Crit Meter by 1–3 points (or 5–15 if you unlock five Troves). Once the bar has reached its maximum of 40 points, your next purchased Trove Key will guarantee at least a 2-star Trove.

Bonus Rewards is a progressive system that gives you extra items simply by opening Treasure Troves. There are milestones you can achieve based on how many Troves you open, with each milestone offering additional items, on top of the rewards you’re already getting. These items include upgrade materials, gems, cosmetics, and more! 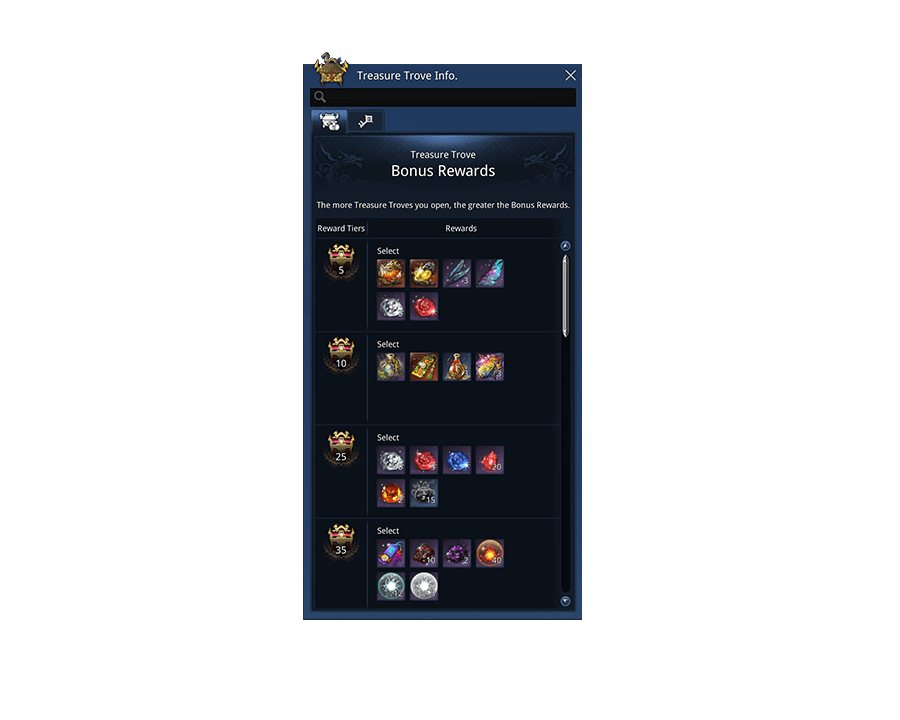 Above items will be available until the December 26 maintenance.

Starting December 5 there’s plenty to find under the Holiday Treasure Trove tree.  If you’ve been hopeful for a new look as we approach the new year, this Treasure Trove has what you need! The ever-so-beautiful Butterfly Effect Costume, Hair Adornment, and Illusion Weapon as well as the radiant Sapphire Wings, new pets, illusion weapons and some old favorites will be making their way into this Trove. That’s not all you’ll find inside. There are upgrade materials, new Dyad gems, the Emperor’s Tomb Reset, and much more. Alongside all these new items is the debut of some wonderfully season-themed skill illusions to make your abilities look more festive. Take a look to see what’s packed in this sleigh full of fun. 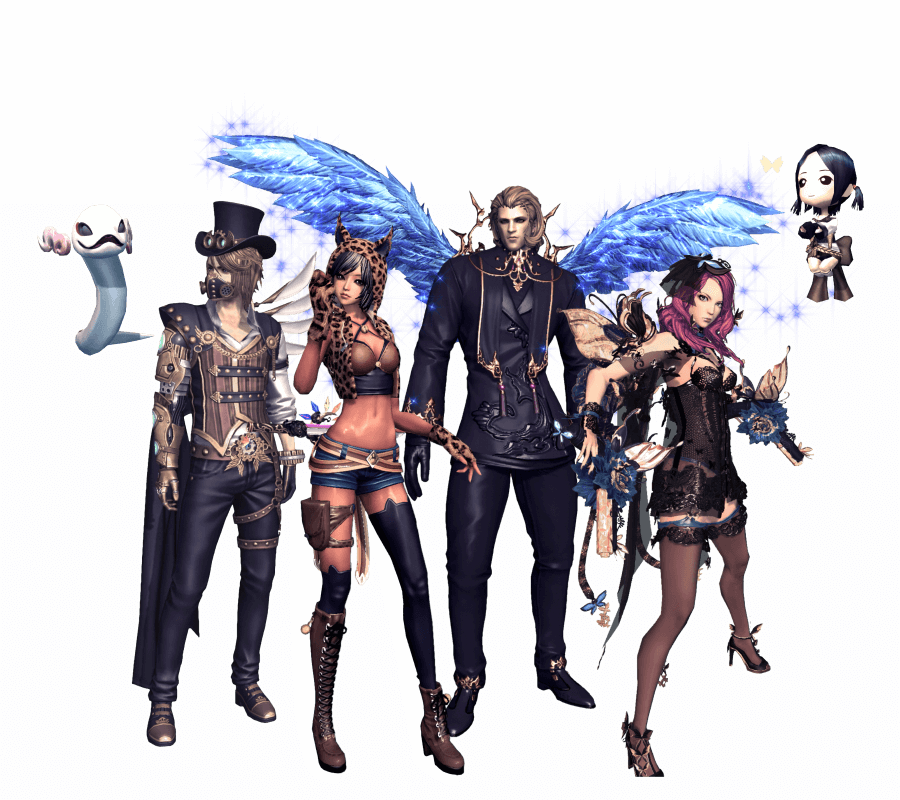 The Holiday Treasure Trove is now available until December 26! Log in now to get your FREE Treasure Trove key and see what gifts you’ll get this holiday season!