Let the fists fly with the Kung Fu Master.

Welcome to our ongoing series where we focus on each of the classes in Blade & Soul. Today kicks off—in more than one way—the Kung Fu Master

Check out our updated class page on the Kung Fu Master, where we’ve revealed techniques from the Hongmoon Secret Tome, plus wallpapers and a class video. Also be sure to join us on the official Blade & Soul Twitch channel this Thursday at 10am PST to see some high level Kung Fu Master play; or check out Twitch streamer Tangent on November 4 at 9am PST as he attempts to . . . master the Kung Fu.

The Kung Fu Master is likely the most complex class, requiring excellent reflexes, strong situational awareness, and quick decision making. This class, more than any other, has a strong variety of skills that are triggered from specific conditions, and those conditions are usually gained from successfully landed hits, dodges, counters, or critical strikes.

Successful Kung Fu Masters can quickly link consecutive skills together in combos—using both fists and feet—to reach significant damage output. But it’s not enough to just initiate combat and simply punch or kick your opponents down; at higher levels, strategically timing your defenses correctly enables a number of strong damage abilities to be activated, while also leaving you nearly invulnerable.

Like other classes, Kung Fu Masters have a specific condition to afflict upon their opponents. They can wrestle the opponent down with a Grapple, and follow up with arm breaks, headbutts, or simple ground pounds.

The Kung Fu Master focuses on dealing two types of damage: Fire and Wind. Not all skills will have an associated elemental damage, but those that do will have their damage increased with the selection of the right items; so building a focus around these damage types is advantageous in the long run, especially as you get to the endgame dungeons.

While in a party, the Kung Fu Master will generally keep the Boss focused on them, as they are only one of the two classes that can generate threat. That means the Kung Fu Master needs to be at the top of their game when it comes to both timing their counters and their dodge abilities to avoid damage, while still chaining combos to keep the threat level high. Since many of their high damage skills are only activated on certain conditions, Kung Fu Masters rely on coordination with their team members to line up combos. Miss a step and the Kung Fu Master can be momentarily ineffective. 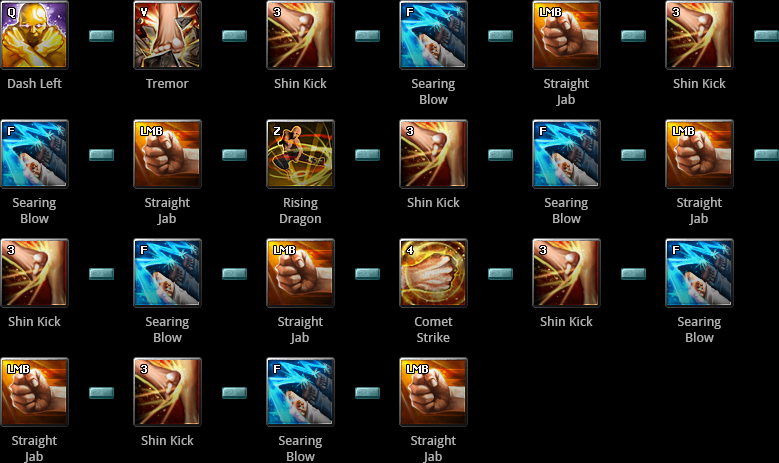