Outfits of the Martial Artist

Your clothes don’t determine your fighting ability, but can influence how the world around you reacts to your presence.

While a martial artist relies on their physical prowess, mastery of their skills, and control of the elements around them, their clothes aren’t entirely purposeless. While clothing doesn’t impart anything to combat ability, both visual aesthetic and symbolism of what the clothing represents can be important.

The outfits you wear will have no effect on your abilities, but some do have additional attributes. First, you must be wearing an outfit in order to gain the benefits from your Soul Shield. Beyond that, certain costumes can also represent your allegiance to a faction, and donning such an outfit will flag you for attack by those of the opposing faction. While your blue or red PvP costume will show you’re either fighting for the Cerulean Order or the Crimson Legion, there are other, regional factions you’ll come across during your travels. By wearing their clothes you can influence the faction’s members—and their enemies—to react to you in a different way. This can come in handy if you’re being sent to infiltrate an enemy stronghold. But your allegiance is not bound to these regional factions. You can easily obtain the costumes belonging to each regional faction, and choose to wear them at any point.

The Wardrobe feature (F3) allows you to browse all of the costumes available within the game—including ones for the Summoner’s Familiar—preview their appearance on your character, and even tells you where they can be obtained. It also serves as a storage closet where you can keep the costume looks you’ve already obtained, and quickly swap to different outfits. Some outfits are just torso coverings, like shirts and pants, while others might also include a matching head item, like a hat or mask. 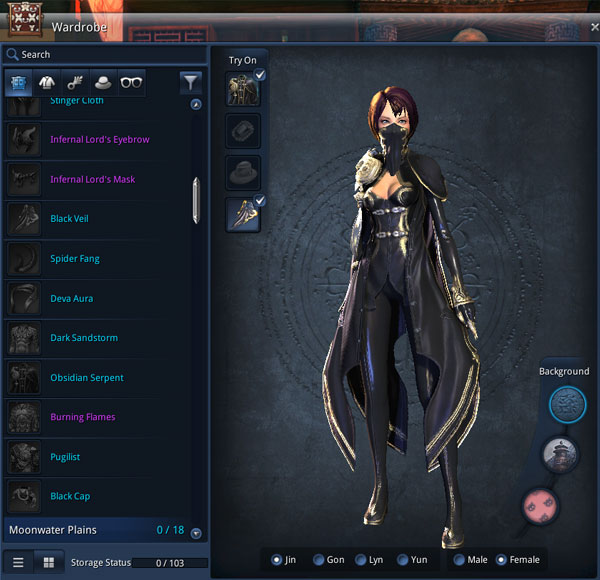 Costumes drop from enemies and bosses, can be rewarded from completing quests and challenges, are unique drops from limited-time events and holidays, or can be purchased from the Hongmoon Store. You should try to collect as many as possible!