The background lore of the world within Blade & Soul

The history of the Earthen Realm is a long and varied one. So much has been lost as empires rose and fell through the ages; tyrants sought to shape history to their own design, and entire generations have vanished in the wake of great tragedies. Even what does still remain, gathered in so many scrolls and tomes pieced together from across the continents, tell uncertain stories with much still left to question. Perhaps all we can really do is cover what we have and draw our own conclusions. Those souls entrenched in their own affairs cannot be trusted to give an accurate telling anyway. It takes a neutral party to find the truth tucked amid legend and lies. Let us first speak of those few mighty warriors who helped shape the world as we know it today. 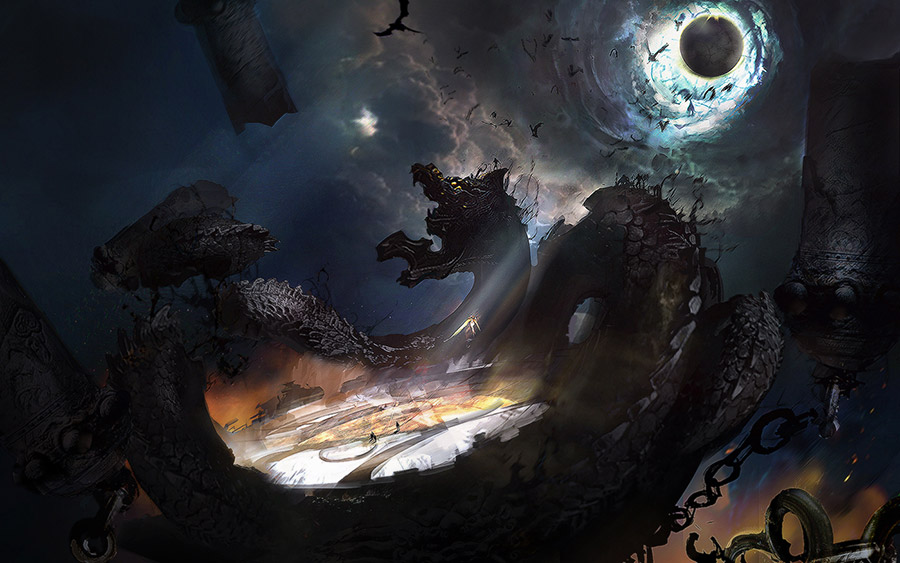 Over a thousand years ago from this present day, the Naryu Empire stood as the ruling power in the entire world. Drawing upon the mystical natural resource of Soulstones from within the earth itself, the Naryu created technological wonders that vaulted them into prominence on a global scale. But today, all that remains of them are half-forgotten ruins and the buried wreckage of their amazing machines. The Naryu, in their hubris, reached too far and dug too deep. The energy of the Soulstones they mined in such excess distorted the spirit of the continent, and the gap between the Dark Realm and the Earthen Realm was bridged. Dark Chi seeped in from the baleful Dark Realm, poisoning the world and unleashing demons upon the populace. The Naryu Empire fell to these horrors and it seemed as though the very world itself would share that same fate.

But the Divine Realm was not content to sit idle and watch mortals suffer at the hands of invading demons. While the denizens of the Dark Realm sought to open a permanent path between their world and the mortal world for conquest, the Divine Realm gave a call to arms. Of all the beings in the Earthen Realm, four powerful martial artists were chosen to fight against the darkness. Mushin: the Divine Fist and the heir to the Naryu bloodline. Jiwan: the Righteous Blade. Iksanun: the Realmwalker. Hong Sokgyun, the eldest of the Four Guardians and so mighty his power earned him the title Earthbreaker. It is said that the divine spirits granted these Four Guardians a weapon of immeasurable power and unknown origins: the Twilight’s Edge. It is said the weapon would change its form to suit whoever wielded it and could drive back the darkness. Armed with the Twilight’s Edge and empowered by the mystical blessings of the Divine Realm, the Four Guardians met the demons in glorious battle.

It would be pleasant to say everything went well. That the righteous triumphed and the world was saved. But, alas, things are never so simple or clean. The demons attempted to summon their master, the Dark Lord, to the Earthen Realm through a Dark Gate so his might could overwhelm the world. Mushin, in a moment of desperation, made a noble sacrifice as he leaped into the Dark Gate and closed it from within, sealing away himself and the Dark Lord. The remaining Guardians had no time to mourn the loss of their friend as they fought against the remaining demons, finally purging the world of evil for a time. But, in the end, all they could really do was delay the inevitable. The corruption of the vile Dark Chi had infested the world and could only be held at bay for so long. 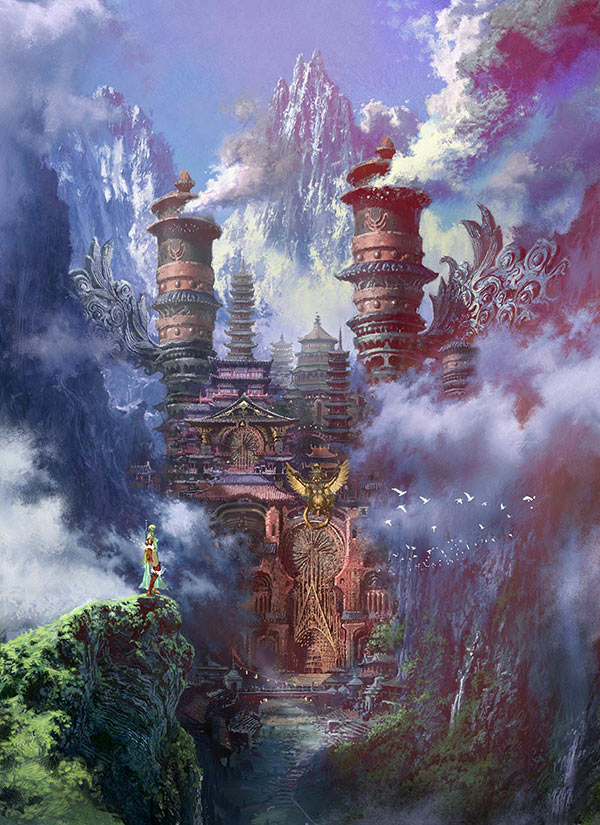 As the centuries marched along, the Four Guardians passed into history and then legend. The world rebuilt itself and new empires rose where the Naryu had once stood. The Stratus Empire came to prominence in the Southern Continent and spread its influence throughout the Earthen Realm. The Northern, Eastern, and Western Continents were each ruled by one of the Emperor’s sons while the Emperor himself remained upon the throne of the Southern Empire. His youngest son, Prince Wan, was not yet ready to rule and remained by his father’s side, learning the ways of leadership and royalty until his day would come. But that day arrived far too soon as the Emperor met an untimely demise, forcing Prince Wan to take the throne for the sake of the people.

From then on, the Stratus Empire was besieged with tragedy and loss. Young Emperor Wan’s older brothers were jealous of him ruling in their father’s wake and sought to overthrow their own sibling, each believing their self to be a more appropriate candidate to rule. The strife and unrest of the Stratus Empire allowed the toxic influence of Dark Chi to return, seeping into the hearts of man as they turned on one another. While the exact nature of the incident is unknown, some great disaster befell the Eastern Continent as its capital city, the Highland Central, was invaded by demons thirty years ago. Prince Sobu and his sister, Princess Solaan, were both killed in the event as malevolent forces overran the city and threatened to open another Dark Gate. But, as before, the remaining Guardians once again rose to their divine duty. The energy of the Divine Realm sustained them throughout the centuries and, along with the Sacred Beasts of the land, they managed to seal away the dark forces once more. The city was lost, but the world was safe again.

That was not the end of the Stratus’ troubles though. With the Empire in such a weakened and disorganized state, it became unable to control its own army. Defectors rose within the Stratus itself as one of its mightiest generals, Yunma Kahn, broke off from the Stratus Empire and founded his own Talus Dominion in the east. In these modern days, the Talus Dominion of the Eastern Continent has risen rapidly in power to become a true force to be reckoned with. Meanwhile the Stratus Empire of the Southern Continent is a hobbled beast gasping its last defiant breaths. The two kingdoms remain fast enemies even as both are fraught with civil unrest and corruption, fighting each other to the bitter end in an ill-fated hunger for power and control. 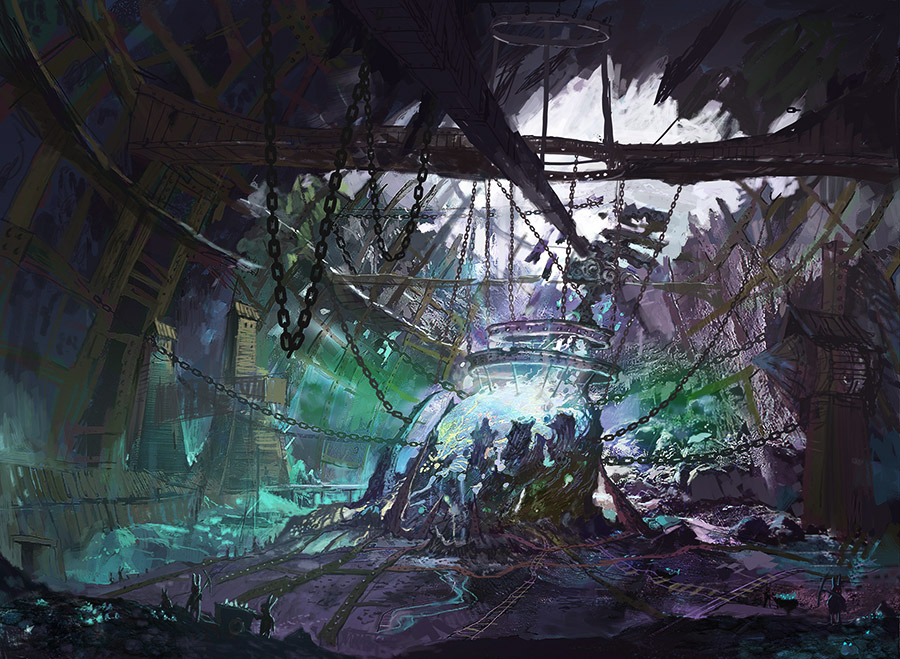 The modern world is built upon the bones of fallen warriors and the ashes of ruined lives. Warring factions have risen to bicker over territory and resources while smaller clans exploit the population for their own ends. In these times of discord, martial artists have grown in population and influence; some as the defenders of the weak, standing up for the people. Righteous warriors such as the Eight Masters have banded together, rallying their clans behind them for the sake of the innocent. The Guardians’ absence is keenly felt: Jiwan had been slain years earlier by the wicked Jinsoyun for the Twilight’s Edge she wielded. Hong Sokgyun struck down Jinsoyun before she could claim the mystical blade, while Iksanun was badly wounded in the ensuing battle and retreated from the world at large.

Where this will all lead is unknown. Dark Chi has once more begun to poison the world, the people suffer under the burden of corrupted empires, and the heroes of old are no longer able to come to the rescue. Perhaps the world truly is coming to an end. Or, perhaps, new heroes will rise up to stand defiant against these threats.